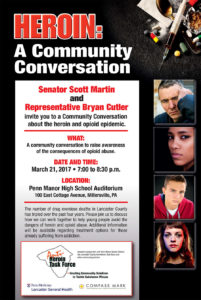 The event will be hosted in conjunction with the Penn Manor School District, Lancaster General Health and the Lancaster County Anti-Heroin Task Force and in cooperation with a number of community partners. The goal is to help raise awareness of addiction issues and share resources and treatment options in order to reduce the number of deaths caused by drug overdoses.

“We’ve seen the devastating impact of the heroin and opioid crisis in communities throughout the area and across the entire state,” Martin said. “One of the best ways that we can address this crisis is by raising awareness among young people of the severe consequences of drug use so they can avoid going down a path that only leads to an avoidable tragedy.”

“The heroin and opioid epidemic – which has been named the worst health crisis in the last century – claims lives regardless of age, gender, race or socio-economic status,” Cutler said. “Thousands of Pennsylvanians have already lost their lives, leaving their families and friends reeling. We simply must address this crisis.”

Both lawmakers encourage parents, students and other advocates to attend the event to learn more about the drug addiction crisis and how the community is working together to prevent future tragedies related to heroin and opioid addiction.